The Denso Marston Nature Reserve is man made and was built in 1991-92. The site is 7 acres or 3 hectares in size and is made up of woodland, ponds and grassland areas. It is ideally situated as it runs alongside the River Aire and the Leeds Liverpool canal. There is also Buck Woods nearby. Having these habitats nearby means that there is lots of wildlife.

On the reserve (as at 2013) we have recorded 114 species of bird, 25 species of butterflies, 12 species of dragonflies, 150 species of plants and 16 species of mammals. As well as the numerous other insects and creatures which are being discovered all the time. Here we shall look at the four habitats on the reserve namely, Water, Woodland, Grassland and Hedgerows.

We have two large pools on the reserve and a small pool in our Spider club area, also the River Aire runs alongside the reserve.

The large pond is about 60ft in length by 30 feet wide and at is about 10 feet deep at its deepest point. The pool has a butyl liner and has about 10 different species of plants growing in it. There are plenty of water borne bugs within the pond. These include Greater and Lesser water boatmen, leeches, water scorpions and several species of diving beetle. This is also a good site to look out for dragonflies such as Large Red Damselfly, Azure blue Damselfly and the larger dragonflies such as Southern Hawker and the fearsome Brown Hawker. If you are lucky enough you may come across the Emperor Dragonfly. This pool has a pond dipping platform for you to dip for pond bugs.

Management of the large pond

Regular surveys are done of the insects and other invertebrate that live in and around the pond in particular dragonfly surveys. There are also in spring frog spawn counts and newt trapping. A lot of the surveying is done by schools when they come to do pond dipping. The pond vegetation is monitored and removed. All the vegetation that is removed is left by the pool to allow and creatures to return to the water. 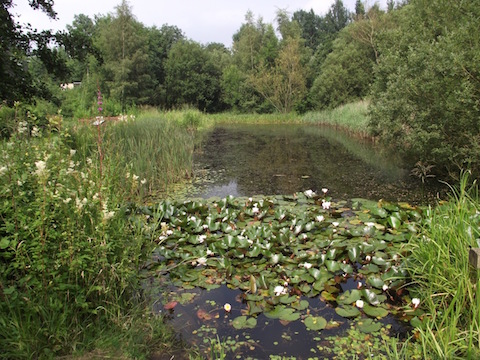 The small pool is half the size of the large pool and this pool has also a reed bed made up of Phragmites reeds in the past this has attracted Water rail. Reed buntings can be seen in this area. This is an area that is favoured by wrens. It is a good spot for newts; we have Palmate and Smooth newts in both pools. Some damselflies such as Azure blue damselfly habit this pool. It is good for diving beetles, the large diving beetles are found in this pool.

We don’t pond this pool we just let it get on. Sometimes if you look during the winter months if you look from the wooden bridge you will see Roe deer feeding in the reeds just look out for ears and antlers!

Also look out for the water soldier plant; this plant has a habit of sinking in the cold weather and coming up when it gets warm. This is the pool where we do most of our newt trapping.

Management of the small pond

We monitor the pool and we remove any excess pond weed, as a rule we remove a third of the pond vegetation, this will grow back in no time the following season. 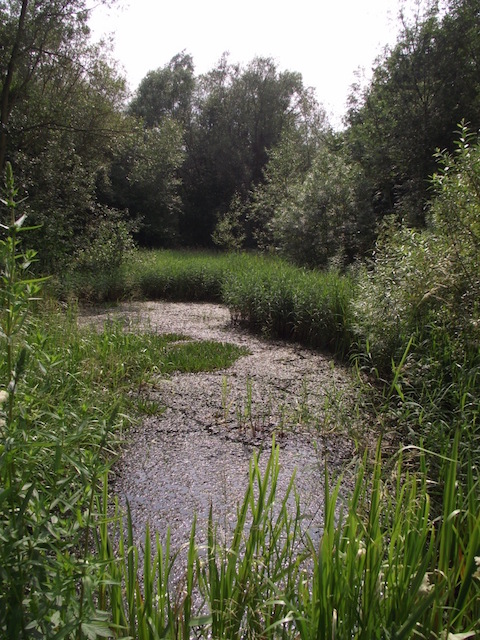 This river runs along the side of the reserve, it has cleaned up over the ten years or so with now breeding kingfisher, regular sightings of goosander, dipper can also be seen. There are good numbers of Banded demoiselle damselflies on the river. Ducks such as Mallard and teal are seen and on occasions a male Mandarin duck as come and paid us a visit. A pair of Mute swans have been on the river over the last couple of years.

The river is a good for migrating birds that use the river as a route planner. Ospreys are seen most years flying over during spring and autumn. 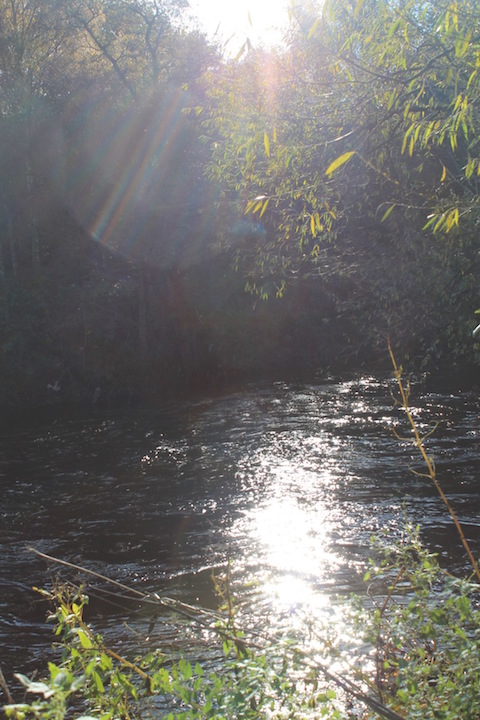 The woodland areas throughout the reserve are made up of mainly broad leafed trees such as Ash, Cherry and maples there are over 30 species of trees on the reserve.

As part of the management of the woodland areas there are areas that have been coppiced. This where individual trees are cut down close the base of the tree this is to open up areas to help woodland plants to grow. The coppicing is done on a rotary basis every 5 to ten years. Coppicing is good for species of butterflies such as speckled wood.

One area that has been coppiced is an area behind Julie’s bench in the middle of the reserve. This area is stooled every couple of years to help the now established Primrose, daffodil and cowslips.

The woodland management on the reserve is important as through this we can look at the health of the trees when the reserve was first planted there were over 30 thousand trees planted. Throughout the years trees have been felled (mainly the weak specimens) this helps the stronger species to grow. With there been a lot of trees on the reserve there are quite a few deaths of trees some of these trees are left to rot some are cut done but leaving a large stump this is good for insects to colonise. Decaying trees are good for the woodland environment as this adds to the biodiversity of the woodland promoting fungi and also habitats for insects and mammals such as field mice and short tailed field vole. As the woodland grows there will be management of the trees. And if you come down to the reserve look through the woodlands and see if you can find some of the exciting bugs we have in there.

We have about 2 acres of grassland throughout the reserve up to date we have recorded about 180 species of wildflower. There are many species of grass which we are working on to identify. The grassland areas are managed in two stages. The areas where people walk and have picnics is mowed weekly and the wildflower areas cut once a year in autumn the wildflower areas that has been cut are put into piles and left this is for our population of Romanian grass snake and also these piles are good for spiders and other insects.

Insects to look for when looking at the wildflower areas are damselflies such as large red damselfly, azure blue damselfly who like to forage for other insects. Butterflies to look for are meadow Brown, large skipper, orange tip butterfly. If you are lucky you may come across flattened runs in the grass this is either short tailed field vole or field mouse. Do be aware however we have a lot of stinging nettles on the reserve so be careful not to get stung there are also plenty of dock leaves around! 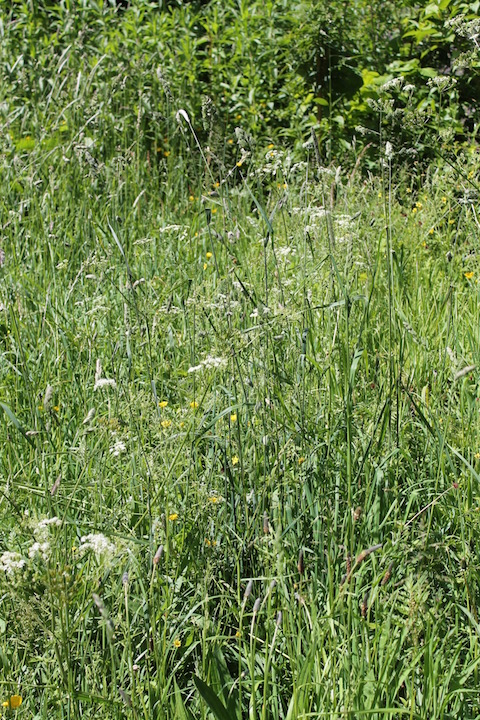 This habitat has been created within the last ten years. We have planted up hedgerows mainly along the riverside footpath this is to encourage wildlife as hedgerows are a fantastic place for wildlife everything from nesting birds to ladybirds, harvest men and a big host of spiders and other insects.

To help the hedgerows to establish and thicken up we have laid a lot of the hedges. Hedge-laying has been around since the Saxon times. The hedges where originally made for stock proofing.

The more species you have in a hedge the better the biodiversity there is within a hedge. We are also doing the hedge-laying on the reserve to help keep the skills of hedge-laying alive. As in some areas it has become quite scarce but in the last twenty years or so groups like the National Hedge-laying Society has promoted training and competitions to promote hedge-laying. 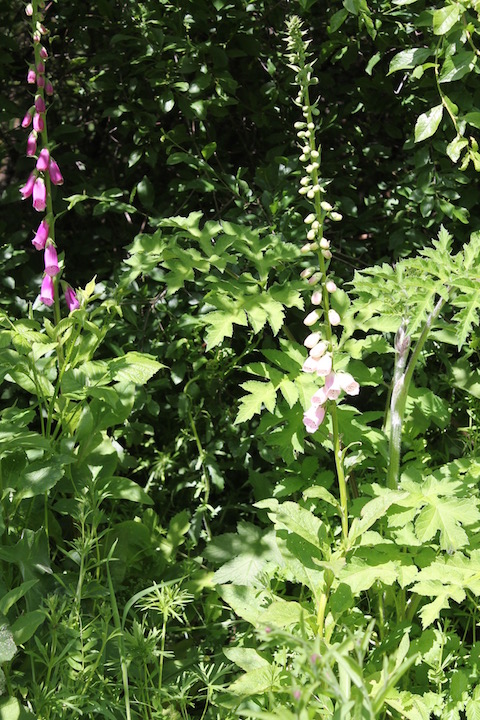